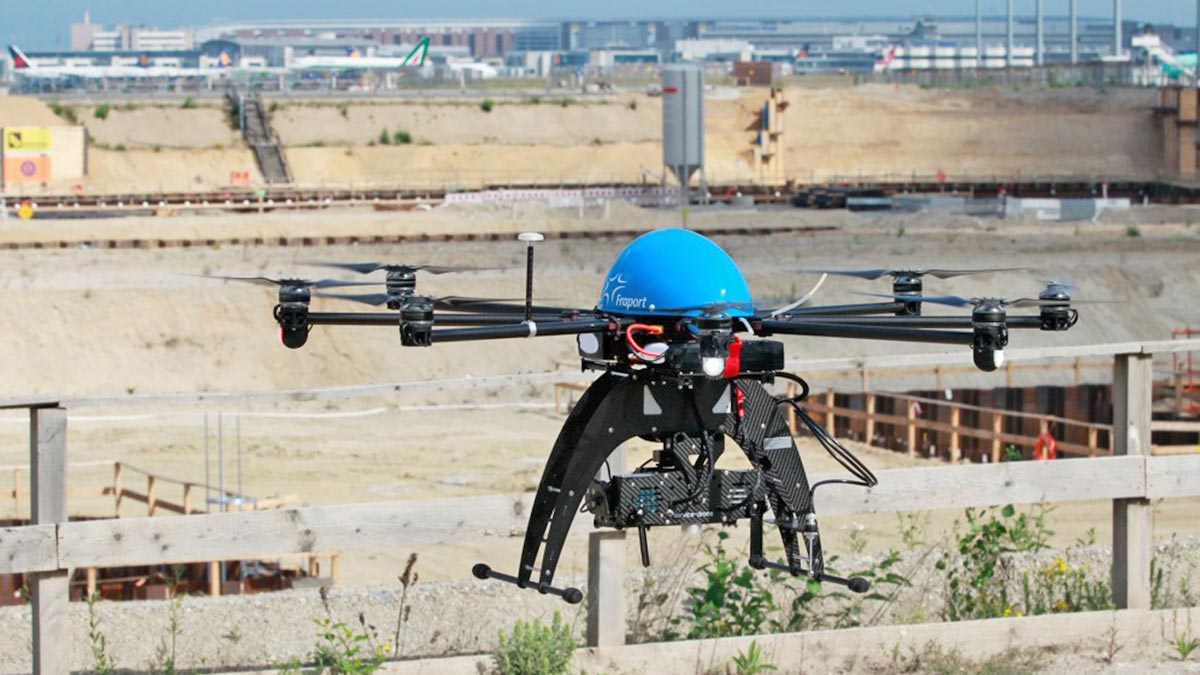 The company from the Berlin area recently carried out their first successful drone test flights at Frankfurt Airport. Their purpose was a more efficient construction progress monitoring of the new Terminal 3. The drone was previously fitted with special technology to prepare it for the use at a major international airport. Together with the airport operator further tests with different application scenarios are planned for the near future.

Worldwide, airport operators are addressing the issue of how to use drones and other auton-omous vehicles to make operations at a major airport safer, more economic and more efficient. An example is a pilot project that took place last weekend at Germany’s largest airport in Frankfurt, in which the surveying office TPI together with Fraport AG had used a UAV (Unmanned Aerial Vehicle) from Multirotor for monitoring the progress of the construction works for the new Terminal 3. Surveyors use drone-created imagery, for example, to calculate the volume of an excavation or to create highly accurate 3D terrain models - much faster and more cost-efficient than with traditional methods. However, the operation of drones in the complex environment of an international airport and the necessary compliance with all regulatory requirements represents a major challenge. In general, the use of drones within 1.5 km of an airport is strictly prohibited in Germany and most other European countries.

Multirotor meets highest technical requirements for drone use at airports

As part of Fraport AG’s innovation project "FraDrones", the regulatory basis for drone operations at the airport was initially created together with the German Air Traffic Control Deutsche Flugsicherung and the responsible state aviation and supervisory authorities. The resulting technical requirements were then implemented by Multirotor in just three months. For example, a transponder as used in commercial airplanes, had to be integrated into the drone, so that it appears on the radar screens of the air traffic control tower to be seamlessly integrated into the ongoing flight operations. This technology made the drone also visible in the apps and websites of consumer flight tracking services such as Flightradar24. In addition to the transponder, a lighting system similar to those of aircrafts was installed.

After the successful completion of the survey flights, it is planned to test more drone appli-cations at the airport soon. "Airports hold a great business potential for us," says Marian Meier-Andrae, head of the Brandenburg-based drone specialist. In addition to construction monitoring, a wide variety of airport operations such as automatic perimeter surveillance, runway checks for FOD (Foreign Object Debris) or the calibration of navigation aids such as approach lighting systems and instrument landing systems (ALS/ILS) can be made safer, more cost-efficient and greener with the use of drones. "Our many years of experience and the profound technical expertise of our company help us to realize special solutions for highly complex applications." Other airport operators from Europe and the United States already show a strong interest in cooperating with Multirotor.